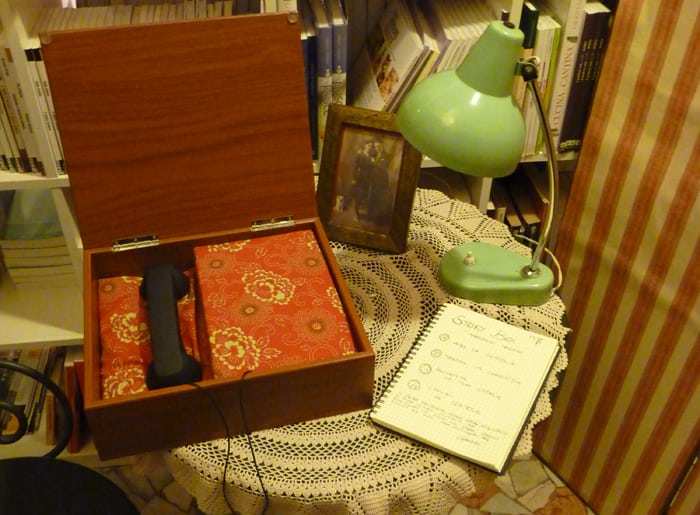 Story Box is an interactive installation created by Melting Pro to collect urban stories told by all those who live or pass through the city. The name derives from the fusion of the words story and telephone box. Thanks to the simulation of a telephone line, a person is asked to leave a voice message by using a telephone handset, placed in a box and connected to a recorder.

The Story Box setting intends to recreate a familiar, intimate environment detached from the chaotic urban reality and connected with memories of the past. Each user establishes his own relationship with Story Box, creating an interaction that can follow multiple trajectories. It is a place intended for all the people who would like to tell their links with the city, narrating an event about their neighbourhood, expressing a feeling connected to faces, colours, objects and moments of an existing urban real place.

Story Box is also dedicated to the future, being a space that can collect proposals and ideas based on the expectations of those who live in a neighbourhood that they would like to redesign following their needs and desires. A box to fill in with important thoughts and then close for safe. The dialogue between in/out, urban/personal life, leads to a new, digital reflection of all the voices that populate the city.

Story Box has been presented as part of the Regeneration Project Ostiense, a laboratory that involved architects, artists, photographers, traders and residents in co-design sessions to imagine new ways of sharing the urban space. It was also used within other events organized by Pastificio Cerere Foundation and in the activities promoted by Naked City Project during the festival 2NC-Fest multipli-cities festival di narrazioni urbane multimediali

Scopri anche
Diamond
Melting Pro
is a cultural enterprise
founded by seven women
with a common goal
to encourage
access to
CULTURE
Why?
arts and culture
are essential to the well-being of
people and communities
To have such impact
cultural organizations and professionals
need to open up, connect and grow